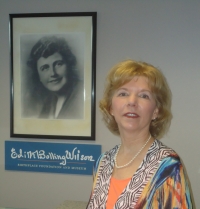 As co-founder of the Edith Bolling Wilson Homeplace Museum, Farron Smith '75 probably knows as much about United States President Woodrow Wilson's wife Edith than anyone. That knowledge and her determination to keep this unique First Lady's story alive for future generations have reaped huge dividends.

The entrepneurial spirit she embraced as a student at Radford College brought her to the forefront of a massive undertaking that required far more than just what can be learned from a history book.

"My husband, William J. "Bill" and I were offered the opportunity to purchase one of the businesses located in the building that was the birthplace of Edith Bolling Wilson at 145 E. Main Street in Wytheville," says Smith.   "That business, Skeeter's World Famous Hot Dogs, was tied to the sale of the building. While it was the business that drew us to the building, we appreciated the history associated with the building as the birthplace of Edith Bolling Wilson, First Lady and wife of President Woodrow Wilson."


Smith and her husband Bill, also an RU alumnus, bought the storefront property and Wilson's homeplace is now a nationally acclaimed museum and tourist destination. It's also turned the heads of producers in a major media venue.

C-Span will feature the Edith Bolling Wilson birthplace in their series "First Ladies." The show airs Monday, Sept. 23, at 9 p.m.

At the time the Smiths bought the property, they admit they were not in a financial position to embark on such an enormous undertaking to restore the Bolling Home.  "However, we always recognized its importance and knew one day we would devote our time and resources to protecting and preserving one of our nation’s important historic sites. In 2006 we founded The Edith Bolling Wilson Birthplace Foundation as a 501 (c) 3 nonprofit organization. The museum opened to the public in 2008," said Smith.

Mrs. Wilson's ties to rural Southwest Virginia are evident at Smith's alma mater. Bolling Hall was named in honor of Mrs. Wilson who came to campus for the dedication ceremony in 1958.

The first several years of their involvement were dedicated to personally sponsoring a Virginia Historic Marker which was placed in front of the building in 2008 and to building relationships with the seven surviving great nieces and nephews of Mrs. Wilson.  As ties continued to be made and friendships grew, the First Lady's remaining family shared the vision of preserving the birthplace.

"The family entrusted the care of their Bolling family artifacts to the museum," Smith says.  "Many of the artifacts in the museum’s collection were personally owned by Mrs. Wilson and her Bolling family and were donated by those who recognize the importance of preserving Virginia’s only birthplace museum of a First Lady."

Radford College's tuition program for employees afforded Smith the opportunity to take classes as her husband worked toward his degree. After her husband graduated, she became a full-time student, graduating two semesters later with a degree in Business Administration.

Smith says her Highlander experience set the path for her to create a dance school, the family business, volunteer efforts, and lead the museum’s efforts to preserve an important part of American history.  " A good business background is the basis for any successful venture of most any type and without that knowledge of business basics even one’s best planned efforts are doomed to fail," Smith says.

The Edith Bolling Wilson project has sparked the interest of others close to the heart of Radford University.

Alumnus Jeremy Miller M.S. '10 is cataloging the museum's artifacts, providing an easier method of locating pieces and identifying their sources.

Professor Emeritus Grace Toney Edwards, who established RU's Appalachian Regional and Rural Studies Center, and her husband John Nemeth, serve on the Board of Directors and on the foundation's Education Committee.

"John and I have thoroughly enjoyed our work with the museum.  We have learned so much and have had opportunities to spread the word about our very own First Lady throughout the region," said Edwards.  "We do a joint presentation – slides, music, and lecture – about her life journey from Wytheville to the White House and beyond."

"My Radford College experience as a married student was a very positive time in my life," says Smith. " The classes I took prepared me to work with an array of people with different personalities; it gave me the tools to become an entrepreneur and the confidence to follow my dreams."