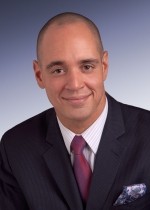 What makes for a successful college experience? Eric Claytor '94 says the keys are education, relationships and involvement.

As the newly appointed senior vice president of affiliate distribution and marketing for Entertainment Studios Networks (ESN), Claytor says his RU experience has helped him to move through the ranks of the challenging corporate world of television. "RU provided me with an environment to explore these areas with a support system that emphasized the qualities necessary towards achieving a fruitful career."

Claytor enjoys talking about his career, his family and his alma mater. He recently shared some thoughts on where his RU experience has taken him.

Question: What will be your main role in your new position?
Answer: To accelerate our efforts with content distributors to carry our portfolio of eight 24-hour HD television networks. (Owned by entertainment guru and comedian Byron Allen, these include: Pets.TV, Comedy.TV, Recipe.TV, Cars.TV, ES.TV, MyDestination.TV, Legacy.TV and Justice Central.) The goal is to outpace subscriber growth projections, eventually having penetration across all U.S. households while providing quality services that resonate with people’s passions.

Question: Where have you previously worked?
Answer: I was vice president, Western region and national accounts, affiliate sales and marketing, for TV One, a network owned and operated by Radio One Inc. and Comcast NBC Universal. I was part of the initial TV One start-up team as an account manager in 2003 and elevated to account director in 2005. In less than three years we secured distribution in more than 32 million households, ranking as one of the fastest-growing cable networks. I left TV One in 2006 to work for the Sportsman Channel as the director of sales and returned to TV One in 2009.  Before television, I had various jobs in ad sales, digital media, finance and software.

Question: What clients do you serve?
Answer: Some of our carriage agreements include Verizon Fios, AT&T U-Verse and the National Cable Television Co-op.  We also offer a TV Everywhere solution for six of the networks, SmartTV.com. The platform gives the consumer more choice and convenience to watch whatever they want anytime, anywhere, on any device at an affordable price point.

Question: What makes ESN unusual?
Answer: We are the largest independent producer-distributor of first-run syndicated programming for broadcast television stations. Some of these shows include sitcoms like "First Family" and "Mr. Box Office," in addition to court shows like "We, the People with Gloria Allred" and three-time Emmy award winner "Justice for All with Judge Cristina Perez." These shows and genres have ratings that indicate a dedicated audience and a strong demand. This model also gives us the ability to promote our network brands.

Question: What is your favorite part of your new role?
Answer: I love the challenge and working for a company that allows you to make strategic decisions quickly. I also enjoy working with our distribution partners. The television industry is in the midst of a dramatic shift in terms of how we access content and how it's delivered. There are so many cool technologies, applications and social networking tools that are changing the consumer experience. The next five to ten years should be interesting.

Question: What is it like to work for Byron Allen?
Answer: Byron knows how to capture an audience with his wit, intelligence and presence. The engaging and friendly Byron people see on television is equally matched by an unparalleled work ethic and determination to build a successful entertainment conglomerate.  Entertainment Studios Inc. is poised for continued success as the media landscape evolves.

Question: Describe "you" outside the job environment.
Answer: I am blessed to have a magnificent wife and two beautiful children in Colorado. I make sure to clear my calendar for sacred time to reboot, either by going to the gym, riding my bike on the High Line Canal or cuddling up with my family to watch a movie. I reenergize by mentoring students and professionals. I am involved in a local community organization, Divine America Inc., which provides positive influences for youth through music and mentoring.
I also sing in the church choir. I was fortunate to grow up in an amazing family in a wonderful Maryland town, right outside of Washington, D.C. Every time I come out to the area for work or pleasure, I make it a point to visit my favorite restaurant, drive by the high school and check out the house I grew up in.

Question: What activities were you involved in as a student at RU?
Answer: I participated in the choral group freshman year.  In addition to performing at RU, we toured and performed with other college choirs. One of my favorite professors was the choral director, Dr. David Castonguay. I recall his great passion and enthusiasm for the music. I also had a stint with The Tartan, was involved in Bacchus, the Inter-Fraternity Council and active with my fraternity, Pi Kappa Phi. I enjoyed intramural flag football in addition to activities that gave back to the community.

Question: How would you describe your overall RU experience?
Answer: The camaraderie, fellowship and spirit at Radford are special. The whole campus has an amazing energy.

Question: What words would you like to share with fellow alumni?
Answer: Overdress for every occasion, have a great smile regardless of the circumstances, and never order sushi in the airport. Call your cable, satellite or telco provider and ask them to carry every Entertainment Studios Inc. network, and make sure your children become RU Highlanders!