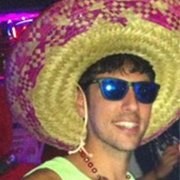 Dylan Roukous '10 has a future so bright, he has to wear shades.  Roukous started his own business Nectar Sunglasses in 2011 with his high school friend Sean Holmes.  "Nectar is about a year-and-a-half old and is basically a brand inspired by the 'sweet life.'  We wanted a brand that was inexpensive but looked good and felt good," says Roukous.  His accessories can now be found in more than 250 stores and is distributed in Mexico, Puerto Rico, Venezuela, United Kingdom, Ireland, Spain, New Caledonia, Philippines, Portugal, Belgium, Switzerland and Costa Rica.

His entrepreneur spirit took flight during the summer before his junior year at Radford. "When I returned to Radford for my junior year, I had a different mindset. That summer I had lived in New York City which really changed my life.  I thought, if I have an idea, I should just go for it," says Roukous.  That year, Roukous started "The Cart."  Between the hours of midnight and 3 a.m., Roukous and a friend would sell food on the corner of Fairfax and Second streets.  "We had an account with US food service.  It was so crazy meeting guys with suits in my college  room," says Roukous.  Roukous started selling sunglasses while still at Radford.  He ordered more than 300 sunglasses to sell to promote a student event.  "When I saw how many sunglasses were packed into the boxes, I was very worried we were not going to sell them all," says Roukous.  Within two days, they were sold out.

"I have always been interested in sales and knew I wanted to start my own business.  I'm not as good with numbers as I am with what looks good," says Roukous.  "We are more of a marketing company.  We are moving into different products such as shoes, shirts and shorts--not just sunglasses," says Roukous.  Nectar Sunglasses employs staff photographers, web developers, and sales and campus representatives throughout the United States.      Top athletes and musicians such as Russell Wilson, Jamie O'Brien, Austin Hair, and the band Umphrey's McGee are wearing Nectar Sunglasses.  "We are very involved in events around the country and are thinking of putting on our own in the near future.  Our main focus is making a quality product that's cool and affordable," says Roukous.

Roukous encourages students to take risks.  "If you say it, do it.  If you have an idea, go for it.  You don't want to look back and regret not going for it," says Roukous.  He also encourages students to take advantage of their professors.  "When I started 'The Cart' my professors really wanted to help me.  I still call Dr. James Lollar and Dr. Gary Schirr and ask for advice," says Roukous.