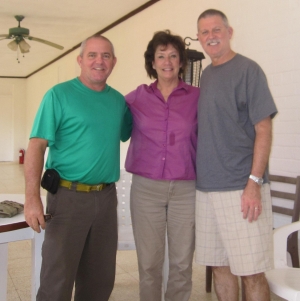 “My experience at Radford is what drove my thirst to learn,” says Drew Thomas ‘92, Principal Engineering Geologist at ECS Mid-Atlantic, LLC (ECS).

In 1982 Thomas graduated from Stonewall Jackson High School in Prince William County, after which he joined the Navy for four years and later worked as a draftsman, for a civil engineering firm. It was this job that led him to want to attend college.

“I had no intent on going to college, but I went to Radford University and I have zero regrets,” Thomas affirms.

“When I first came to Radford,” Thomas states. “I was unsure of what I wanted to major in. After taking Geology 101 and Geology 102 with Dr. Chester (“Skip”) Watts, I learned that I could study the science of Geology that I enjoyed so much and still work in the engineer field upon graduation. It was the ability to focus my studies on engineering geosciences that had me hooked.”

“Radford and Dr. Skip Watts had a great influence on my career path early on,” Thomas adds.

Because Thomas did not immediately attend college after his high school graduation, he was slightly older than his fellow classmates. “I was married with a child while attending Radford University and I had to look for employment to support my family.”

During Thomas’s sophomore year at Radford he obtained a job as a draftsman in Blacksburg. “I graduated from Radford University in 1992 with a degree in Geology- Engineering Geology and the following Monday I went back to work at the same firm as a Staff Geologist,” says Thomas.

After working in Blacksburg for two more years and having a second child, Thomas’s mother influenced him to move to Northern Virginia in 1994.

In 1999, Thomas’ passion for engineering geology led him to open GeoConcepts Engineering Inc. (GEI) in Ashburn, Virginia. He parted ways with the company in 2011.

Shortly after leaving GEI, however, Thomas received a phone call from a former employee and was offered a position with ECS Mid-Atlantic, LLC. “I am very happy with where I am today and what led me here,” Thomas says.

Thomas was recently sent overseas to Harbel, Liberia to consult on a building damage issue for Firestone Natural Rubber Company. While Thomas was in Liberia, he was housed and fed at Firestone’s Guest House, where plant management eat their noon meal.

“On my second day there, I was chatting with a group of six people at lunch and was pleasantly surprised to hear that two plant managers were both Radford University graduates,” Thomas says.

“It was remarkable to find three Radford graduates together in such a remote location,” Thomas adds.