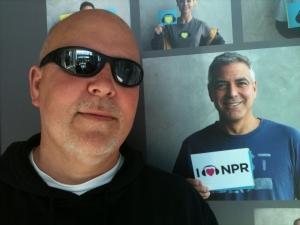 "I was heavily involved with WVRU.  I was a news anchor and writer for three years and news director for two," says Mattingly.  WVRU Radio's advisor, Ted McKosky, helped to educate and influence Mattingly in his career choice.  "Ted gave us the hands on experience that we needed.  He coached us to success and by the time we graduated, we were prepared for the real world," says Mattingly.

"In 1985, there was a fatal explosion at the Radford Army Ammunition Plant.  That day, my professors excused me from my classes. They said reporting on the accident would give me more experience than sitting in class that day. Later, WVRU received calls from Richmond and Roanoke in hopes of getting a copy of the audio we recorded," says Mattingly.

Today, Mattingly is a morning news anchor for National Public Radio (NPR).  "I had been a producer for 15 years, and then I received the offer to be news anchor.  I absolutely love it. It is what I have always wanted to do," says Mattingly.  Throughout his career, Mattingly has worked at various radio stations. He says that no matter at which station he is, he always has flashbacks to his Radford days.  "Sometimes when the microphones are on and we are about to go live, something will remind you of being back at WVRU where it all started,” says Mattingly.

NPR’s newscasts are the most listened to network newscasts in the country.  "Knowing that we have over 24 million listeners is exciting.  It is funny because having that many listeners doesn't scare you, but put one face in the window and it can be nerve-wracking for sure,” says Mattingly.
Mattingly shares his love for Radford University with his son, Josh Mattingly, who is currently a sophomore at the university. His wife Jennifer Mattingly is also an alumna.  "We can walk in the middle of Moffett field and nothing has changed, but turn the corner and there are three new buildings," says Mattingly.

Mattingly has given back to the university by participating in the School of Communications’ Communication Week, and through establishment of the Mattingly Scholarship for WVRU.  "The advice I gave students then, still stands true today.  Take advantage of the opportunities that are in front of you.  If you want to be in radio, join WVRU.  If you want to write, write for the Tartan or something else on campus.  You must find it and gain experience," says Mattingly.  "When I graduated I landed a job at Q99 in Roanoke.  I was able to get that opportunity because of my experience at WVRU, my internship and the guidance from Ted McKosky.”