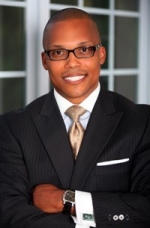 Successful lawyer credits RU with inspiring him to excel

Curtis J. Martin II ’92 of Atlanta is one of the most respected and successful litigation attorneys in the city. He practices at Miller & Martin PLLC, a full-service law firm with about 200 attorneys.

As a student at Radford University, however, Martin wasn't sure the practice of law was where he would find his career. Martin received a B.B.A. in marketing. He credits RU with helping him learn how to think critically and was encouraged by professors who took great interest in his development.

"RU provided a special environment where it was evident that the professors and staff were invested in successful outcomes for their students.  I entered RU as a 17-year-old student and greatly benefitted from the patience and guidance that I received early on from my professors. The campus environment and class sizes were also conducive to learning and contributed greatly to my growth and maturity."

Moving into Muse Hall as a freshman and quickly learning the ins and outs of adapting to roommates, cafeteria food and coed dorm life are some of Martin's first RU memories. As a first-year student he enjoyed working out in the Peters Hall gym and participating in intramural sports. He also cherished being a part of the brotherhood of Sigma Phi Epsilon and forging lifelong friendships with the brothers of the Virginia Nu chapter.

Martin said his professors helped him cultivate his analytical skills and challenged him to look at "the big picture" when solving problems. These skills are invaluable as a practicing attorney and are necessary for a successful legal career.

"There wasn’t any one person or event that influenced my decision to become an attorney. My initial attraction to the profession was born out of a realization that the law affects almost every aspect of our lives," he said. "I am also a voracious reader and have always enjoyed reading about the lives of men and women who have had a meaningful impact on our society. Many of these individuals were trained as lawyers and, despite the numerous lawyer jokes, I still believe that the law is a noble profession."

Martin has defended and been involved in cases across Georgia. His clientele is diverse, from new businesses to Fortune 100 companies. His practice areas include business litigation, labor and employment, trucking litigation, product liability and more.

In addition to his litigation practice, Martin provides pro bono representation through the Atlanta Volunteer Lawyers Foundation's Domestic Violence Program, which assists victims of domestic violence, and serves on the board of directors of Horizons Atlanta, a nonprofit organization that provides an academic enrichment program to children from economically disadvantaged households.

"One of my favorite aspects of being an attorney is the ability to use my law degree to serve others. The practice of law provides a remarkable platform for giving back to others. Some of my greatest experiences as an attorney have been through pro bono representation and through my service to nonprofit and civic organizations."

Martin said his personality is such that he is well suited for practicing law. "It provides a unique type of balance that I seek in my life. As a litigator, I am required to use reasoning and critical thinking to solve problems." He credits Radford University for the strength of his communications skills—both oral and written—and his professors for helping him to polish those skills.

Martin’s RU education gave him a perspective different from that of many attorneys. "My business degree sets me apart from many of my professional peers and provides me with a unique understanding of my clients’ business objectives. My greatest pleasure is the opportunity to partner with clients to understand the scope of their business and look for ways to help them grow their business, solve problems and achieve the success that they desire."

Martin's list of affiliations and accomplishments is long. Most recently, he was the 2011 President of the Gate City Bar Association, an affiliate chapter of the National Bar Association and is Georgia's oldest African American bar association. When Martin was installed as its president in January 2011, one of his key initiatives was a pledge to award more scholarships than ever before in the 63-year history of the organization. When he left the presidency one year later, more than $20,000 in scholarships, the highest amount of scholarship funding to date, had been awarded, and more than 60 programs had been implemented to advance the legal profession and serve the greater community. In recognition of these achievements, the National Bar Association recently recognized the Gate City Bar Association as the 2011 Affiliate Chapter of the Year.

The Atlanta Business Journal features a bimonthly column by Martin focused on legal and workplace issues and has named Martin as one of Atlanta’s “40 on the Rise.” He was also named one of the 100 most influential individuals "who are illuminating the way forward in Atlanta's legal and accounting communities" in the 2011 Who's Who in Law & Accounting special edition of the Atlanta Business Chronicle. The Atlanta Business League also recognized Martin as one of Atlanta’s Men of Influence. He is a 2011 Fellow of the Leadership Council on Legal Diversity and also a Fellow of the American Bar Foundation. For the past three years, he has been selected for inclusion in Georgia Super Lawyers, Rising Stars, marking him as a top Georgia lawyer under the age of 40. This distinction is reserved for only 2.5 percent of Georgia lawyers under 40.

Above all else, Martin said, he is devoted to his family, giving accolades to his wife, Mary, for being supportive of his career. In an interview earlier this year with the Atlanta Tribune, he commented that she does a "fantastic job maintaining a loving and stable environment for our two children." He added that he wants to be as good a parent to his son, Justus, and daughter, Sydney, as "my mom and dad were to my sister and me."

In keeping with all the traits that have brought him this far professionally, Martin said he will keep seeking opportunities to give back.

Thinking back on his time at Radford, Martin said, "If I had to do it all over again, I wouldn’t change a thing. My education at RU provided me with the tools necessary to be successful and competitive in the marketplace. I credit much of the professional success that I have achieved to the lessons learned and tutelage received while a student at RU."

A native of Forest, Martin said his upbringing was modest, and he said he was never the “fastest, strongest or most gifted." He attributed his achievements to determination, faith and the RU professors who encouraged and inspired him to believe in himself.