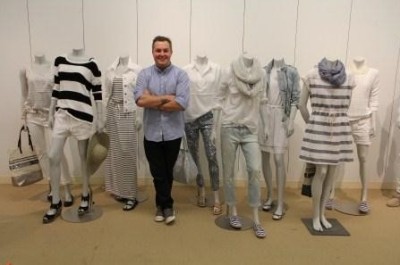 Clothing retailers have many tricks up their sleeves to make products more appealing. They know which shirts and pants go together, which belts pull the outfit together and which pose a mannequin should assume to grab the eye.

There is a kind of magic to elegantly presenting products for consumer consideration and, at GapKids, Radford University alumnus Christopher Thompson is now the man behind the curtain.

The Pulaski native has made a career as a manager of visual merchandising, a field in which he brings a creative vision to the retail environment. Designing magnificently styled mannequins, stunning seasonal displays and in-store merchandise presentations for GapKids stores across North America is Thompson's mission at Gap headquarters in San Francisco.

"My true passion is visual merchandising," Thompson said. "I still pinch myself. It's hard to believe that my work is showcased in 700 stores across the country."

Thompson's newest title is manager for global marketing, visual merchandising and GapKids, a position he assumed during Gap Inc.'s recent restructuring of its global brand. Working as part the new global creative team, Thompson will be responsible for conceptualizing and building in-store product presentations for GapKids.

Thompson was stunned when he was offered the new role earlier this year, and realizing what an amazing opportunity it would be for his career, he accepted it gladly, he said.

Now a mover and shaker by anyone's definition at the corporate offices, Thompson began his career with The Gap at New River Valley Mall in Christiansburg during the 2001 holiday season. From that modest start, he pursued a path from retail associate to visual merchandising positions at Walt Disney World and with the Macy's and Belk department store chains. In 2009, he moved to Washington, D.C., to take a job with the company where it all started.

"I tell everyone, as nerdy as it sounds, that I bleed blue—Gap blue," he said.

While a student at Radford University, Thompson cultivated several interests. He had thought he would be an English teacher, but during his RU days he found himself working at several newspapers, including Pulaski's Southwest Times, Christiansburg's News Journal and RU's own student newspaper, The Tartan. He fell in love with the stage as well, participating in campus productions such as "As Bees in Honey Drown," "The Philadelphia Story," "The Boyfriend" and "The Jungle Book." Thompson was a member of the honorary theatre fraternity Alpha Psi Omega.

Thompson says that his experience in theatre has helped him become such a confident, well-rounded individual.   "From presenting in front of large groups to working in clothing design, business and finance, construction and marketing, there isn't an aspect of my job now that doesn't tie back to my education," he said.

Thompson occasionally finds himself missing the mountains and fresh air of the New River Valley, but his Radford education gave him the tools to build a career in some of America's greatest cities. "Having lived in Orlando, Atlanta and now San Francisco, there's just something about this fast-paced world that I can't get enough of."

From Radford student to creative professional, Thompson has carried the Highlander spirit with him. He offers current RU students these secrets to success: "Laugh at yourself. Make mistakes. Try something new. Take an arts class. Work as hard as you can. And, finally, make a lot of friends."