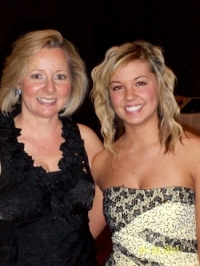 The Golden Gate Bridge is the backdrop when Chris Covington '90 takes her daily run. When she was a student at Radford, her daily life—which involved a good deal of running about then too—played out against the backdrop of a chemistry lab, meeting rooms and the beautiful campus that she loves.

Covington, a native of Virginia's Tidewater region now living in San Francisco, is the national president of Alpha Sigma Tau. She oversees the 100-year-old organization's strategic plan, budgets, investments, policies, staffing and facilities. It is a full-time corporate job, but "I just don't get paid for it," she said. "Instead of making a profit for our investors, we produce social capital for women so that they can lead humanity."

Founded in 1899 and based in Indianapolis, AST is a part of the National Panhellenic Conference and defines its ideals as being "active, self-reliant and trustworthy." The sorority's philanthropic project is the Pine Mountain Settlement School in Kentucky, and Habitat for Humanity is its service project. AST makes alumnae affiliate membership available to women who, due to various circumstances, were unable to join the sorority during their college years.

Covington said it was important to her family that she enroll in a school that would be a good fit, and Radford offered that. "Radford provided a smart education in an environment that allowed true faculty-student interaction," Covington said. A chemistry major and self-described problem solver, she recalled long hours in the labs and the professors who worked alongside her through her courses. She said their time and attention made a difference.

"My RU education was not just about learning to solve the problems academia challenges us with, it was about learning to be a leader, filled with passion for life and compassion for others," Covington said. "You only get that through intense interaction with like-minded students, driven faculty and dedicated administrators. When those three components come together in education, amazing things happen."

Covington was involved in Greek Life as an AST member while also devoting time and her talents to the American Chemical Society, Panhellenic Council, "The Beehive" yearbook, Campus Activities Board, intramural athletics and more. "RU just offers so many opportunities to excel. You have to grab them," she said.

Covington credits the Office of the Dean of Students, then under the direction of Bonnie Hurlburt, and Professor Ed Jervey, now retired, with helping her grow personally. She has maintained contact with Jervey and said, "He doesn't know it, but I have a set of Alpha Sigma Tau letters he wore years ago. When I need to ground myself in solid core values, I pull them out."

Before becoming national president for AST, Covington worked as a chemist for IT Corp. and Lockheed Martin. Her job took her to some of the most hazardous sites in the United States to work with teams of scientists testing hazardous-waste incinerators.

"We would travel around the country bringing specially designed incinerators online that would safely clean up the environment. We would climb stacks three to four stories tall, completely suited up in protective and SCBA breathing gear, and work with some intense materials and protocols," Covington said. "Often I was one of the only women on site, which provided unique opportunities for me. We then had to educate agencies on our methods and the results of the tests."

In all her career choices, Covington said, she applies the problem-solving skills she learned at RU to areas where she can serve best, including her AST position.

"Being president, I’ve had some amazing experiences visiting members and campuses across the nation, presiding over conventions, initiating new chapters, lobbying Congress and the Senate on behalf of Greek-related bills, including the Collegiate Housing and Infrastructure Act, which would allow tax-deductible donations to fraternal foundations specifically for housing facility safety measures and improvements, including fire prevention."

Covington also works closely with 25 other National Panhellenic Conference presidents on issues that are vital to the fraternal movement. This experience has taught her that "Greek life is about being the bridge between the classroom and the boardroom."

Covington and Laura Turk '87, M.S. '90, an executive director of advancement at RU, are partnering to organize an AST endowment during the 2012-13 academic year. To learn more about the endowment, email Covington at ccovington@hotmail.com or Turk at lturk@radford.edu.