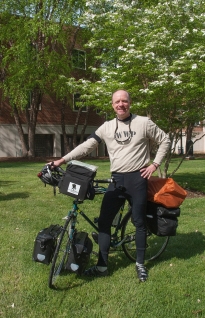 Alumni says thank you by cranking his pedals

As children, we hop on our bicycles for the freedom of our own transportation.  As we get older, we do it for the exercise and to feel like a kid again.  Carter Dages, 1983 accounting alumnus, is cranking his pedals for more than 3,800 miles across the country to say thank you.  His goal is to raise $50,000 for the Wounded Warrior Project.

The Mechanicsville, Va. resident began his trek in Yorktown on May 2. He’s following the TransAmerica Trail to Oregon.  He will then pick up the Western Express to San Francisco.  Dages thinks it will take him three to four months on his classic 1991 Schwinn road bike to complete the ride.  This is something he’s always wanted to do, and the time is now right. “Before embarking on the next chapter of my career, I now have the ability and the support of my family to dedicate my time and energy toward raising funds on behalf of this most worthy cause,” says Dages.

After graduating from Radford, he spent seven years at the large accounting firm KPMG. He then spent five years as the controller for the Rappahannock Electric Cooperative. Most recently, he served as Vice President and Chief Financial Officer for Highway Service Ventures, which owned and operated four petro stopping center facilities in four states.

While working for Highway Service Ventures in Ashland, Va., Dages shared building space with a U.S. Marine Corps Officer Recruiting Station.  “I had ample opportunity to meet those enlisting and those who came back from service.  I was amazed and in awe of the parents dropping their kids off to serve,” says Dages.  “The final compelling point for me, especially post-911, is that I think my freedoms, my way of life and my prosperity wouldn’t be what it is today if not for men and women who served.  The men and women who are wounded in battle surely had dreams and aspirations that may not be able to be fulfilled, as mine have, due to their injuries,” he says.

Dages has spent 30 years of his life working for himself and his family.  He says now it’s time to do something for others.  In 2012, Highway Ventures was sold and Dages knew this was his chance. He said “goodbye for now” to his wife and three children and began his journey.  He’ll be stopping along the way at Rotary Clubs, of which he’s a member, to raise awareness and funds for his cause.  He says he’ll make one detour in his journey to watch his 12-year-old daughter Emily, who is a competitive rock climber, compete in the Divisional Championship June 15-16 at Hoosier Heights in Indianapolis.

Dages created a website to enable friends, family and supporters to follow him in his adventure.  Visit www.cartersfundraiser.org to see a map of Dages’s progress and learn more about his cause.