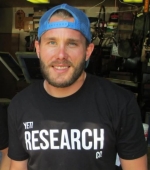 The story behind the mythical and mysterious Yeti has always intrigued Blaine Teets ’07 and his snowboarding crew. While enjoying the slopes on the mountain, the group jokes about finding the Yeti; which in turn, inspired them to jump into the unknown.

“Throughout the snowboard season, my friends and I have a running joke about the Yeti and Bigfoot. We began referring to ourselves as the Yeti Research Team and it stuck,” said Teets.  “This past season, my best friend Nick designed shirts for a trip to Jackson Hole, but quickly our joke became a reality when the feedback we received was too much to ignore.”

Teets and his partner Nick Lowe will officially launch their apparel business, Yeti Research Company, on September 19, 2015.  Their mission is to provide high-quality apparel that is stylish and comfortable, yet functional both on and off the mountain.

“People should always try to be inspired by their passions, work for something better, that’s the motivation for this venture,” said Teets.  The meaning behind the company can be summed up as, “No one has ever found the Yeti and no one will ever find the Yeti.  Hence, why you keep exploring and you keep searching for new experiences.  People can apply this to their everyday life, no matter what their passion or hobby is.”

Teets has been snowboarding since he was 12-years-old.  He has always been active in sharing his love of the sport by not only getting friends involved, but helping to start the ski and snowboard club at Radford University. By being a leader in the club and gaining guidance from the business school, Teets left the university with confidence of fulfilling his dream.

“I’ve always wanted to be a business owner.  My current career, as a commercial insurance account executive, puts me in the position to be an owner. But I ultimately wanted something for myself.  I wanted to take the passion I have for the mountains and my desire to explore and create something amazing.  But I couldn’t do it alone.  Nick has blossomed into an amazing screen-printer and designer, so it made sense.” said Teets.

Teets has proven to be a man that never settles. Yeti Research Company is only the beginning of the adventures that lie ahead for him.

“We are using YRC as a trial run. We don’t want to just limit ourselves to winter apparel. Bigfoot Research Group is a product line that will allow us to be more creative with our products for the warmer months,” said Teets.

With the drive to never settle and to keep searching for personal satisfaction, Teets is well on his way to success.  “We aren’t going to find the Yeti, so the only way to get close, is to keep pushing and to #keepsearching.”