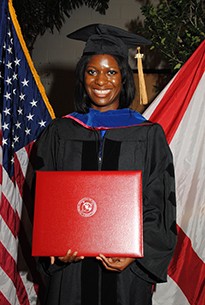 “When someone hears that I went to Radford University they know there is no question about the quality of my education,” says Dr. Apryl Alexander M.S. ’07.

Alexander serves as assistant clinical professor at Auburn University, where she – among her professorial duties to both undergraduate and graduate students – works with juvenile sex offenders at the Accountability Based Sex Offender Program (ABSOP) who are in a court mandated treatment program. The program, housed at the Mt. Meigs Complex outside of Montgomery, Ala., is overseen by the Alabama Department of Youth Services and supplies treatment to more than 100 boys between the ages 12 and 21 years old.

“I work with the Department of Youth Services to develop treatments for adolescents with illegal sexual behavior problems,” Alexander explains. “Treatment is the essential element in ensuring successful re-integration into the community.

“Sex offenders who undergo treatment re-offend at a much lower rate than those who go untreated,” she adds. Alexander states that the ABSOP program has a 4 percent recidivism rate for new sex offenses.

To say that Alexander is not where she thought she would be when she began her undergraduate education would be an understatement. Originally attending Virginia Tech with the aim to become a veterinarian, the Delaware native changed her major to psychology when she realized her interests lay more in the human mind than in an animal’s body.

Upon graduating from Virginia Tech, Alexander began working as a CARE (Crisis Advocate Responding Effectively) companion at the Women’s Resource Center of the New River Valley, located in Radford. As a CARE companion, Alexander would provide counseling, support and advocacy at local hospitals and police stations to adult and child victims of sexual assault.

“I originally swore that I would never work with offenders,” she says. “In fact, I even once wrote a paper saying just that. But doing lots of clinical work with at-risk adolescents helped me realize how many offenders have some sort of trauma in their own background.” In her current position, Alexander estimates that approximately 60 percent of the juvenile offenders fit this description.

It was while working at the Women’s Resource Center that Alexander would intersect with Radford University, forever changing her career trajectory.

“That is how I met Dr. Elliott,” she says. Dr. Ann Elliott is a professor of psychology within the College of Humanities and Behavioral Sciences at Radford University. “She is the reason I came to Radford for my master’s degree.”

While completing her masters in clinical psychology, Alexander served as graduate assistantship in the Radford University Office of Substance Abuse and Sexual Assault Education. In this position she conducted counseling exit interviews for RU Aware program for students who violated the alcohol policies in the conduct system, helped organized campus-wide events such as Take Back the Night, Alcohol Awareness Week, The Clothesline Project and Eating Disorders Awareness Week. Alexander also presented lectures on the topics of sexual assault, rapist profiles, internet safety and alcohol awareness to freshman University 100 classes, psychology and nursing classes, and fraternities and sororities.

“Radford did a great job in preparing me for a doctoral program,” Alexander says. “I received such great academic training. And being a graduate assistant made me an outstanding doctoral applicant.” Alexander ultimately received her doctorate in clinical psychology from Florida Institute of Technology.

While her time here was short, Radford University and its faculty have played an integral role in Alexander’s life and career.

“Dr. Elliott continues to be a mentor to me,” Alexander says. “And, I’ll be coming back in the spring.” Elliott asked Alexander to give a colloquium for the Department of Psychology on April 22, 2016.

While getting the most out of your education will probably not be the subject of her colloquium, it very well could be.

“Take advantage of opportunities around campus – whether it be lectures or simple conversations with professors. That will help you learn what you do – and do not – want to do in your career,” Alexander says. “My work with the Women’s Resource Center changed my life and my interests,” she adds.

“You never know what you are passionate about until you try.”