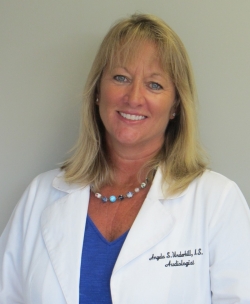 “I will never forget driving around the corner and seeing campus in front of me.  I instantly knew that I made the right decision and that I was home,” says Angela Sheppard Underhill ’86, M.S. ‘87.

Underhill earned her undergraduate degree in 1986 in Communications Sciences and Disorders, then her master’s degree in 1987.  “There were only four people in the graduate program at the time.  We had an advantage because we all were able to receive first-hand experience in the speech and hearing clinic, because we were responsible for staffing it,” says Underhill.

“As an undergraduate, I found my love for hearing aids.  Your patients come in unable to hear and you immediately change that,” says Underhill.  After graduation, Underhill completed a year-long clinical fellowship supervised by an audiologist.  At the end of the year, she gained her medical license and a job that lasted for 25 years.  “My supervisor offered me a job at his small practice. The private practice started off very small, but grew into a rather large practice with five different locations,” says Underhill.  In 2012, the owner sold the practice and with the support of her family, Underhill decided to open her own practice instead of working for the large corporate model.

“I’ve run my practice for two years now and I could not be happier.  Opening my own business allowed me to keep a personal touch with the patients and practice medicine the way I know it should be done.  Fitting a hearing aid is a very personal experience.  I like to build a relationship with my patients and learn about them, especially when you are dealing with something as important to them as their hearing,” says Underhill.

Angela Underhill Audiology is a private practice that is located in Virginia Beach.  “I am very upfront with my patients when it comes to my services.  I like to have each appointment be long enough to address any and all of their concerns or questions and I do not over book.  I have created a safe and comforting environment for my patients, and because of that, all the challenges of owning a business are well worth it,” says Underhill.

Underhill often reflects back to her campus days at Radford University.  “My diploma is on the wall of my business for all to see.  It is a wonderful conversation starter!  Many of my patients see it and just light up because of their own personal connection with the university.  Ironically, some of my patients are the parents of my college friends, and having that connection makes the medical process for that patient easier.  The reputation of Radford just keeps getting better, and better and it is such a wonderful feeling,” says Underhill.