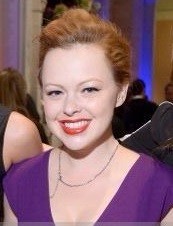 Alicia Sable '01 has been a part of the Radford family since she was 12 years old.

"I was involved in the Community Arts School on campus.  I took voice lessons from former professor Betty Turner and sang in her children's choir.  When it came to my college decision, Ms. Turner made it simple," says Sable.

Today, Sable works alongside John Goodman in the new Amazon series Alpha House, starring as Tammy Stackhouse. "I like doing theater, but I love T.V. Working with Alpha House is a dream come true.  It is everything I have ever worked for," says Sable.  Sable had starting roles in many shows including Gypsy and Notorious Bettie.  "Being employed in this business can be challenging.  It is such an amazing feeling though to sing and make people laugh.  Seeing the audience smile and tap along makes all the hard work worth it," says Sable.

No matter the show, Sable can reflect on her time at Radford. "Radford was such a part of my life.  It helped shape me.  My professors gave me the knowledge I needed, sent me in the right direction, and helped me succeed," says Sable.  Recently, Sable sang at the Lincoln Center in New York.  "I could hear Ms. Turner's voice in my head right before I hit the high note.  'Drop your jaw, Alicia, drop your jaw.'  I still hear that every time I sing," says Sable.

When asked what her favorite professional experience is, Sable says Alpha House.  "Live theater and television are two different things.  I enjoy theater, but Alpha House is such a cool experience.  I get to see all the stages being filmed and watch them be pieced together," says Sable.

Sable encourages students to enjoy their time at college.  "I learned so many life lessons at Radford that still help me today," says Sable.  "I grew up with this university and cherish everything it has helped me to become."