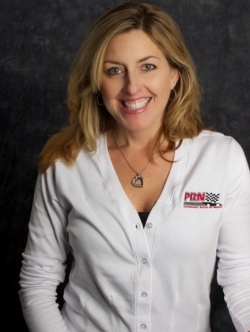 “I was encouraged by my professor Dr. Ray Penn to get an internship.  He said it would help me figure out my future path.  Today, I am the broadcasting director for performance racing network (PRN).  Without his advice, I would never be here,” says Alicia Lingerfeldt ’90.

As a student at Radford University, Lingerfeldt majored in speech communication and was involved in the Sigma Kappa sorority.  “At Radford, I matured in more ways than I knew I could.  The university gives you more than just an education.  It gives you freedom, responsibility, guidance and many life lessons,” says Lingerfeldt.

While earning her master's degree at RU, Lingerfeldt began an internship in 1992 at PRN. She continued her career with the company for nearly 20 years, serving as director of broadcasting for 16. “I direct the live broadcasts of the NASCAR races.  I am responsible for directing two booth announcers, two turn announcers and four pit reporters on the broadcast,” says Lingerfeldt.

Many of Lingerfeldt’s responsibilities take place before the race actually starts.  However, once the drivers start their engines, she is focused on each and every car and is ready to respond. “I have to be watching the cars because if someone falls back, I need to know the story as to why.  Our team has a well-rehearsed protocol and we all know to give the announcer who saw the incident the air time to talk,” says Lingerfeldt.

Lingerfeldt says that she has been the only female broadcasting director for PRN.  “In the beginning, the men didn’t think they had to listen to me.  Through the years that has changed.  I am very proud of my job and what we accomplish here.  I am proud that people feel like they can rely on me and know that I can get the job done,” says Lingerfeldt.

Lingerfeldt’s work does not stop once the race is over.  She also handles the payroll and budget for the network.  And by producing the shows, she is able to meet most of the top drivers and get to know them on a more personal level.

“When I was student, I wasn’t sure about what I wanted to do after graduation.  If I would have decided against doing an internship, I don’t know where I would be today.  I have only had two jobs in my life, not 20, and I am proud of that.  My advice to students is to get internships.  Use them to figure out what you want to do.  My internship changed my life, allow yours to do the same,” says Lingerfeldt.