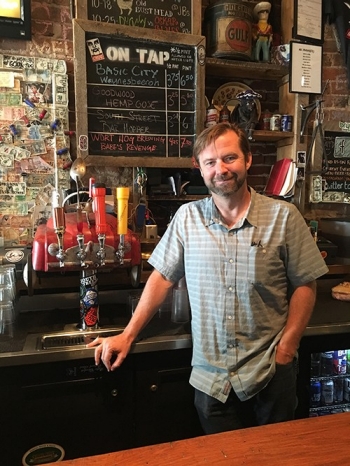 Being a restaurateur was not on Aaron Ludwig’s ’93 mind while he was attending Radford University. Without knowing he would one day open a restaurant with his best friend, Mike Sabin, Ludwig took classes that he thought were fun, such as art and graphic design. Today, those classes are helping him in his career.

Ludwig's businesses have grown tremendously throughout the years. Having never managed a restaurant before, he did not know what was normal for a restaurant operation.

“As it turns out, that might have been one of our key advantages,” Ludwig says. Since Ludwig and his partners were not like other restaurant owners, they were able to be more creative and unique in their approach, which caused people to take an interest and helped their business thrive. Currently, the Jack Brown’s Beer & Burger Joint employs more than 300 people across four states, and the company is working on its twelfth location in North Carolina.

"Radford is on our radar for a location," he continues.

Studying at Radford University was very special thing for Ludwig, a first-generation college student. He says he loved his marketing classes because he was able to learn through experiences from outside of the classroom via assigned projects that are similar to what he does today. Acquiring skills and knowledge from his marketing and art classes is something he is thankful for today because those skills are useful in his businesses now.

"To be able to have that art background and a creative outlook – it taught me a lot about seeing things from a different light and helped me build my restaurants," Ludwig says.

According to Ludwig, the best thing about being a student at Radford is meeting different people. He's grateful for all the experiences he gained from the University.

For students like Ludwig, who want to get out there and do what they love, he says, "Although it’s important to get into a field you care about, you need to continue to receive feedback from family, friends, industry experts and professionals to help guide you.”

He continues, “The most important part is whatever concept you come up with, make sure it’s something you love and something that can help you succeed in many areas."