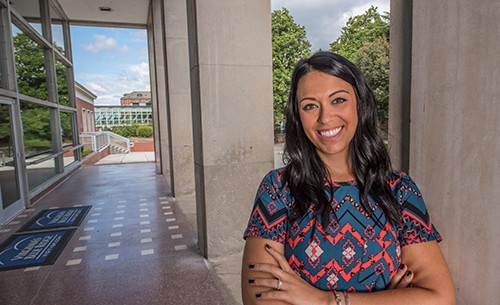 “I originally wanted to be a teacher, so I majored in elementary education,” Ricotta explains. “I realized that teaching wasn’t the best fit for me when I took a course on how to teach children math. The idea of teaching children math terrified me.

“Better people than myself will teach children math.”

As a sophomore, Ricotta decided to change her major to nursing. “Also not the best fit for me,” she says. It was then that Ricotta had her light bulb moment.

“I realized that the common theme that interested me in both teaching and nursing was working with people,” she explains. “That’s when I decided to switch my major to communications.

“And I still graduated on time,” Ricotta adds, proudly.

Ricotta works with writers and media personalities – such as bloggers, reporters, foodies and other media – from outside of the area to focus their coverage on the Roanoke Valley region. “Sometimes I feel almost like a wizard behind a curtain. It’s kind of magical.”

While Ricotta works hard at her job, it is not a hard one to do, in her opinion. “We have so much to showcase here,” she says. “From endless outdoor amenities to live entertainment and craft beer and wine, Virginia’s Blue Ridge has a lot going on, and having that be known to the world is what I love most,” says Ricotta.

Ricotta’s passion for the area stems, in part, from her time spent with another Radford University alumna. “I was required to do an internship prior to graduating, and was lucky enough to land one at a marketing firm run by Samantha Steidle ’04,” Ricotta says. “She served as my mentor, and she really opened my eyes to the positives of the region.

Ricotta adds, “This area has given me so much, and I wanted to pay it forward. Tourism is a great field for me to show my passion for the area.”

Speaking of promotion, Ricotta says that she promotes her time at Radford University every opportunity she has. “Radford University is the pinnacle of my memories,” she says. “It introduced me to new relationships and allowed me to grow as a person. It prepared me for the real world.

“I still think of my crisis communications professor, Dr. John Brummette, and his non-traditional approach to teaching at least once a week,” Ricotta continues. “For our final exam, a mock crisis event was set up on campus, and we role-played with mock press conferences. We were forced to respond to a realistic crisis on-the-fly with no prior preparation.”

That course, and others like it, are what helped her make a smooth transition to post-graduate life, Ricotta says. That transition is why Ricotta recommends that current students work a job – any job – in their area of interest.

“Get involved and reach out to people as soon as possible. Start lining up internships, and jump in with the sharks,” Ricotta says. “As a fellow millennial, I can say, drop all senses of entitlement. Get out there and challenge yourself.”