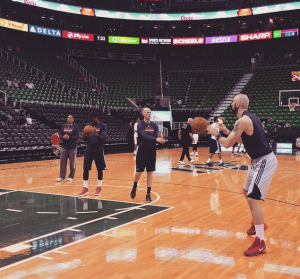 David Adkins '89 works with the Washington Wizards during practice.

David Adkins '89 was hired by the Wizards in July of 2014 upon recommendation from a friend. He took the job after coaching stints with the University of Maryland’s women’s basketball team, and before that, a handful of assistant coaching jobs at high schools around Virginia.

Adkins has a solid reputation for developing players’ skills from the high school ranks to the professional, including 2013-14 NBA Most Valuable Player (MVP) Kevin Durant of the Oklahoma City Thunder, whom Adkins coached at Montrose Christian School in Rockville, Maryland.

When this opportunity with the Wizards presented itself to Adkins, he called Durant for advice. He left a message saying he had a couple of questions and asked for a return call.

“Kevin called back in 10 minutes. I asked him to be honest with me about whether my coaching style would work in the NBA,” Adkins recalled. “Here’s the coach asking the student, and the student is giving the coach advice.”

But it wasn’t only Durant’s advice that night on the phone that convinced Adkins to take the job in the pros. That came two days later when Durant called Adkins and said, “Hey coach, you want to get a workout in.”

“Here’s the best basketball player in the world calling me for a workout,” Adkins said. “I almost dropped my phone.”

That night, Adkins and the NBA’s then-reigning MVP hit the gym until midnight.  Adkins put Durant through a near two-hour, strenuous workout. Durant let Adkins take the lead on the court, asking for guidance along the way.

The next morning, Adkins visited the Wizards for an on-court evaluation, working out rookies Otto Porter and Glen Rice Jr.

He was prepared, confident and on his game.

“After working out the NBA’s MVP the night before, I was pretty confident I could do this,” Adkins said.

While the team traveled, Adkins and teammate Dave Phillips made good use of the empty Dedmon Center gym late at night, playing one-on-one and honing their skills for the moment they earned their chances to play for the Highlanders.

“We just had a passion and love for the game,” Adkins said.

Radford Athletics Hall of Famer David Smith ’85 was another teammate who had a profound impact on Adkins and his future as a basketball coach and educator.

“I admired and learned a lot from him, and I still talk about him to my players,” Adkins said of Smith. “He always brought energy every day. He always had a smile on his face. He was a little bit like Charles Barkley.”

Adkins admired Smith, partly because of his every-day demeanor. Smith never seemed to have a bad day, Adkins recalled.

“As I moved on through life, I’ve looked back on that and I always thought of Dave. I don’t ever want to have a bad day, and I don’t want the players I coach to have a bad day, because the gym is supposed to be your oasis,” he said. “You never want a player to leave the gym in a bad mood. You never want your players to come into the gym and not be excited … because it is a game.”

Reflecting on his path to where he is today, Adkins credits his coaches at Radford, Joe Davis and his staff.

“I am at this point in my career today because Joe Davis and Steve Robinson recruited me. They came into my home and recruited me to go to Radford after I left ODU. Until then, I had no idea where I was going to go,” he said. “I get to do this [coach and teach basketball] every day because of the opportunity Joe Davis gave me at Radford. It was the basketball scholarship that started it.”

“Coaching in the NBA might have never happened if I didn’t go to Radford. And all of those guys from Radford are still a part of me today because of what they brought to work every day.”