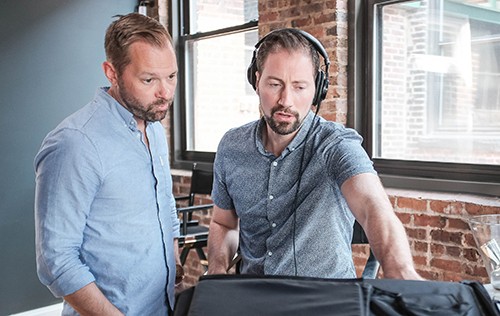 “What we try to do is capture the human experience,” says Darren Durlach ’04, a film and television director and co-founder of Early Light Media (ELM), a Baltimore-based video production studio. ELM “puts social responsibility first, using video as a medium to capture our interconnectivity as humans in a way that is both beautiful and relatable,” says Durlach.

“To make something relatable, you need to tell a personal story no matter what the medium is,” he continues. The studio’s commercial and documentary work has received numerous awards and nominations, and has been featured by such outlets as National Geographic and the Aspire Network.

Storytelling has always been in the Richmond-native’s blood. “As a kid I wanted to direct commercials,” Durlach explains. “When I got to Radford, I found that I really liked the idea of creating something and making a social impact.”

Although Durlach had an idea of what he wanted to do with his career, the path getting there was not easy. “I was taking a broadcasting class and the professor, Dr. Clay Waite (now professor emeritus of communication), realized I was failing the class,” he says. “Dr. Waite had a stern conversation with me that ultimately lit a fire under me. It was a pivotal moment that turned around my entire collegiate experience.

“That is when I learned that you have to make your own destiny,” Durlach adds. “You are only going to get out of something what you put into it.”

Durlach continued to make his own destiny upon graduation from Radford University, first working as a photojournalist at a television station in Charlottesville before moving up the media market food chain to a station in Baltimore. “When I began working in television I found what I really like is telling stories,” he explains. “While in Baltimore I was awarded over 20 regional Emmys. That is when I realized, ‘okay, this is what I should be doing.’”

His success in Baltimore allowed Durlach to move into the role of senior multimedia producer with Boston Globe Media. While there, he was responsible for all phases of video story production for boston.com and bostonglobe.com, producing both daily content as well as long-form stories. It was this position that gave Durlach the experience – and confidence – he would need to co-found ELM in 2013.

Durlach’s success is due, in his opinion, to a simple formula. “Ninety percent of being successful is finding what you want to do and 10 percent is doing it well,” he explains. “Once you find out what you want to do, then comes the easy part.

“Find that thing that you are good at and work harder than everyone else.”