Dance, theatre travel to Dublin and London for an international experience 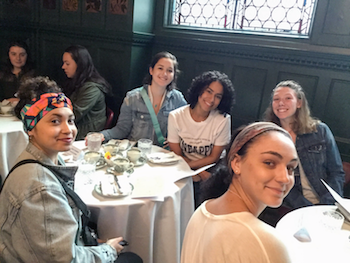 Students at the Victoria and Albert Museum, at which they had afternoon tea at the London museum.

Students and faculty from the Department of Dance and the School of Dance and Theatre traveled to Dublin, Ireland and London to soak in and learn from the international arts scene.

Led by Assistant Professor of Theatre Robyn Berg and Professor of Dance Deborah McLaughlin, 12 students participated in a study abroad experience from May 16 to May 30 that encompassed a wide variety of artistic activities.

The trip began in Dublin during the 15th annual Dublin Dance Festival, which featured various shows and experiences for the students.

“I had been reading about [the festival] each May and was really excited to finally go,” McLaughlin said. “What was really outstanding for them to see was a range of work from different countries – there were Spanish, Lebanese and Irish choreographers. The work is deeper and more honest about issues choreographed in the pieces, whereas a lot of work in the United States is about showing off the technical brilliance of the dancers.”

Jamie Becker, of Frederick, Maryland, enjoyed the performance of “Lila’s Death,” by Ali Chahrour. Earlier that week, dance students were able to take a class with Chahrour.

“We got a feel of his personality and his style and then we got to see him in action,” Becker said. “I really enjoyed that. The class was a trance-dance course, doing one step over and over again until you get past your point of exhaustion.” 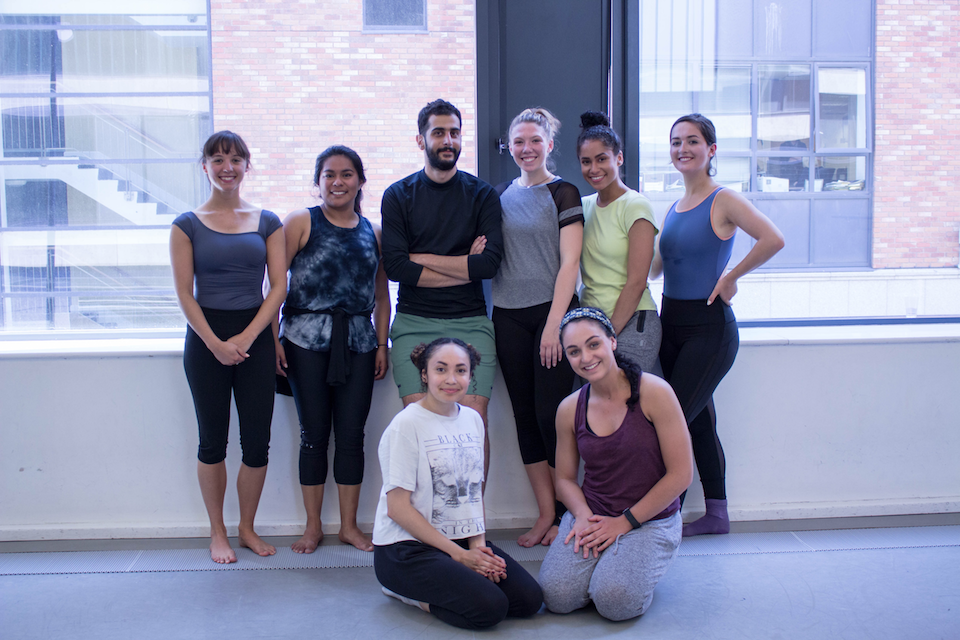 Dance students after taking a class with Ali Chahrour.

In London, dance students took more performance classes – one at Pineapple Studios and one at The Place, a contemporary dance school. At Pineapple Studios, students chose which class they wanted to take – Becker choose a hip-hop jazz funk fusion class.

“It was fun and very upbeat,” she said. “[The class was] hard and fast, but a good challenge. The teacher was very uplifting and kept us all going.”

The course dance students took at The Place was an improv-based dance class, one that Becker said she would apply to most of her classes at Radford. 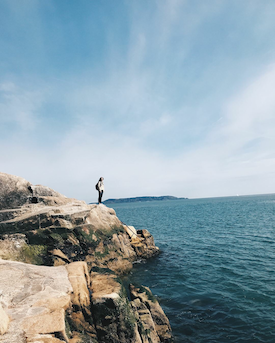 “If I’m going to audition for performances or companies, improv is one of the most important things,” Becker said. “That class was a challenge because it was a different form of improv. If I continue to work on that, it will benefit me in my classes at Radford and as a professional.”

In each city, as part of their interdisciplinary work, dance students attended a theatre production and vice-versa. In London, the overlapping work was a performance at the historic Shakespeare’s Globe.

At the theatre, there is an option for standing tickets in a section called “The Yard.” These are affordable general admission “groundling” tickets that allowed the Radford University theatre contingent to be right next to the stage during a performance of “As You Like It.”

For Berg, the day at Shakespeare’s Globe stood out as the best. The day kicked off with a guided tour of the historic theatre, now in its third iteration. The original theatre was built in 1599, destroyed by a fire only 14 years later and rebuilt the following year. In 1644, the reconstructed Globe was demolished. The current Shakespeare’s Globe was opened in 1997 and built using 1599 specifications to the extent possible.

Being in the Globe Theatre was thrilling for me. I’ve always loved Shakespeare, and getting to experience his works first hand just a short distance from where they were originally performed was a dream come true.

“As actors, what we do is take on the lives of other people. We are showing humanity to our audiences,” Berg said. “The more you can know about humanity by experiencing it all over the globe, the better you are going to be at that job. Being able to see other cultures and see how people interact and how it is different from our country is so important.”

In Dublin, the theatre students took in various productions, including the International Dublin Gay Theatre Festival and at the National Theatre of Ireland, the Abbey Theatre. At The Gate Theatre in Dublin, the students saw “Assassins,” a musical by Stephen Sondheim.

“I think it was good for the students to see that theatre is international – that just because this an American play written by an American writer about American Presidents – that doesn’t limit it to being produced only in our country,” Berg said.

Bekka Knost from Christiansburg said that the international reach of the very American show was initially “jarring.”

“Their interpretation was true to the original intention of the piece, and the actors had clearly done a lot of research on their parts and the figures they were portraying,” Knost said. “John Wilkes Booth, Lynette Fromme and all the other characters were very convincing, realistic and true to history.”

Knost, who is a theatre major with a focus on technology, said she would incorporate the visual aspects of the performances she saw into her work at Radford.