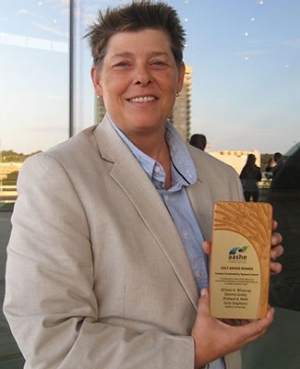 A Radford University comparative study of the efficacy of intervention strategies of student electricity use in campus residence halls is the winner of a campus sustainability research honor presented by the Association for the Advancement of Sustainability in Higher Education (AASHE).

The organization annually bestows the prestigious awards on institutions and individuals for outstanding achievements and progress toward sustainability. The awards were presented in October at the 2017 AASHE Conference & Expo in San Antonio.

Entries were judged on overall impact, innovation, stakeholder involvement, clarity and other criteria specific to each category.

“The purpose of our two-year study was to determine whether, and how, electricity consumption by students in university residence halls were impacted through three intervention strategies, specifically electricity conservation.” said sociology associate professor and study co-author Allison Wiseup.

The study found that communications and programming around energy conservation is a cost effective way to reduce student electricity use.

Some of the key points of the study, Wisecup said, are “sustainability interventions, of any kind, in campus dorms reduces electricity use among residence hall occupants, and some interventions are more effective than others.”

Active programming strategies that involve contact with students are the most effective means for reducing electricity use, she noted.

“Passive strategies, high-definition, interactive displays with information about energy use, while effective, are less effective than strategies using programming involving interactions with students,” Wisecup said, who accepted the award at the AASHE ceremony.

Also contributing to the study were Geospatial Science Professor Rick Roth, former College of Graduate Studies and Research Dean Dennis Grady and former Sustainability Director Julio Stephens. The study was published in May in the International Journal of Sustainability in Higher Education.

“The 2017 award winners demonstrate an inspiring passion for solving some of the world’s most complex challenges. They are truly pioneering the campus sustainability movement,” said AASHE Executive Director Meghan Fay Zahniser.